While the Chinese seem to be enjoying more liberty and choices in their everyday lives, and continue to pursue their individual versions of the Chinese Dream, an almost invisible (but chillingly palpable), ever-looming facade hangs over their daily activities making it seem like they’re actors in a Chinese version of The Truman Show. There is no denying the incredible advances China has made over the last several years in opening up opportunities for its citizens in many areas. Travel has opened up considerably, for example, and it’s fairly easy for average citizens to move about the country, including on newly-constructed high-speed rail systems, or an enhanced airline infrastructure. In urban areas, especially, cell phones and the internet are ubiquitous, perhaps rightly so since it’s the Chinese who assemble an enormous number of the world’s mobile communications devices, particularly Apple products. And the modern mass transit systems gleam and sparkle as they rapidly move throngs of urbanites across enormous distances that make up the huge metropolitan areas of the world’s second-most populous nation. 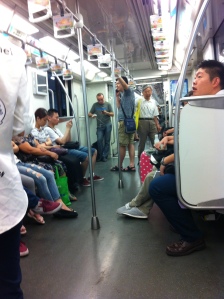 The Bullet Train We took to Nanjing

This seeming openness and freedom is set against a backdrop of censorship and periodic shows of symbolic and actual force on the part of the government in Beijing. While much of this apparently washes over most Chinese like a gentle wave, to the Western foreigner it can seem repressive, isolating, and a bit unnerving. Some of this was known to me prior to arriving including China’s internet firewall blocking social media sites like Facebook and Twitter, the search engine Google, and websites such as The New York Times. Aware though I was, however, I still was not totally prepared for the twinge of isolation I felt brought on by not being able to freely surf the internet and search for information that I needed for my professional or personal needs.

Adding to this ongoing low-level sense of intellectual deprivation were some overt displays of power on the part of the government including the frequent sounds of low-flying military jets doing maneuvers, and the fact that my arrival coincided with an annual period of compulsory military training for youth producing groups of students walking around in fatigue uniforms all over campus.

The most unsettling reminder that I wasn’t in Kansas anymore, however, was when my blog site stopped loading two days into my month-long stint. Knowing that Facebook would be blocked, I thought I was being smart by setting up a blog site for writing about my experiences and posting pictures. The first night I arrived I easily posted a blog, and went to bed. The next evening, after exploring my surroundings, taking some interesting pictures, and considering what I wanted to write, I eagerly sat down to compose a second post only to find that the computer just kept grinding away trying to load my blog site. I also noticed that the site would partially load, but would not allow me to get to the login page.

Then it dawned on me! My site’s domain name—thedemocraticpromise.org—had probably gotten swept up by the internet firewall and blocked by the government censors! Whoa, was that an unnerving realization! At first, I was quite discomforted, then irritated, and then I was simply disgusted with myself for not thinking more carefully what to use for the domain name. (Full disclosure: my wife was irritated with me for the same reason, but not because she thought the domain would be blocked in China, I must honestly admit. As you’ve noticed, I’ve given better thought to the domain name and it is now “the1787POD.org” in a nod to the Constitutional Convention’s promise of democracy).

Finally, thank god for the NPR app on my iPad! For some reason, it worked during my entire stay in Shanghai (maybe because it was an app and not a website) and I listened to “all things NPR” religiously, even more so than when I’m in the States. Note to self: I need to send another check to my local NPR station—WYSO in Yellow Springs!